The Dawnay Arms Inn was built in 1779 and is situated in Newton-on-Ouse at the gates to Beningbrough Hall. CHR worked closely with the client to ensure that all expectations were met in a satisfactory manner.

The overwhelming success of the project led to its inclusion in CEDA Grand Prix Awards in the Small Sized Project category for which we received an outstanding achievement award. 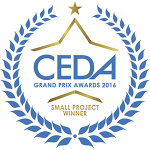 The Dawnay Arms Inn was bought at auction by chef Martel Smith and his wife Kerry, a former Hilton Restaurant Bar manager. The couple had previously owned a fine dining restaurant in Leeds and acquired the Dawnay Arms Inn following the birth of their first child.

Martel had heard of CHR through successful projects posted about on Twitter and he was interested to see what we could do for him.

The main project concerns were initially energy consumption and potential savings to be had by switching from bottled gas to all electric.

The owners were also interested in renovating the kitchen area in terms of hardware and extraction methods. The kitchen at the Dawnay Arms Inn was previously fitted with several outdated cooking apparatuses which were – by their design – energy sapping and inefficient.

In addition to this considerable expense, cleaning and maintenance was both inconvenient and costly.

CHR worked together with Martel and Kerry to create a design that addressed cleaning and convenience concerns as well as offering substantial savings on their energy bill.

Design constraints were considerable due to a lack of space and preservation of some existing hardware. Martel had always previously worked with Bonnet gas suites and was sceptical about switching to Eco-Chef. However, after visiting the factory where the suite is manufactured, any reservations he had were quickly put to bed.

As well as improved ventilation and cooking hardware, CHR’s new design included a vinyl floor to assist with maintenance and cleaning. The company enlisted its specialist flooring contractor and advised on the kitchen’s new floor.

The client wished CHR to recycle wherever possible. This was better for the environment and helped to keep costs down. Through careful planning, half of the kitchen’s existing canopy was retained and a new, more efficient ventilation system was subsequently installed.

Martel himself was extremely hands-on and performed a substantial portion of the work himself with CHR’s direction. His dedication saw the Dawnay Arms Inn only close for a 2-week period. The closure was only partial as CHR happily loaned some portable induction hobs to the publicans.

Space constraints meant that the new range had to be manufactured in sections and brought into the kitchen piece-by-piece. By bringing the constituent parts through the front door and main bar, the kitchen wall did not need to be removed. This was particularly important for a space with such heritage.

Training and support was given from both CHR and the kitchen equipment’s key manufacturers. The client was extremely happy with the results. In total, Martel and Kerry’s new setup produced a net saving of over £11000 in energy costs over its first year.

With its new kitchen equipment in place, the Dawnay Arms Inn can continue to serve exquisite food to the people of Newton-on-Ouse, York.

We use cookies on our website to give you the most relevant experience by remembering your preferences and repeat visits. By clicking “Accept All”, you consent to the use of ALL the cookies. However, you may visit "Cookie Settings" to provide a controlled consent.
Cookie SettingsAccept All
Manage consent

This website uses cookies to improve your experience while you navigate through the website. Out of these, the cookies that are categorized as necessary are stored on your browser as they are essential for the working of basic functionalities of the website. We also use third-party cookies that help us analyze and understand how you use this website. These cookies will be stored in your browser only with your consent. You also have the option to opt-out of these cookies. But opting out of some of these cookies may affect your browsing experience.
Necessary Always Enabled
Necessary cookies are absolutely essential for the website to function properly. These cookies ensure basic functionalities and security features of the website, anonymously.
Functional
Functional cookies help to perform certain functionalities like sharing the content of the website on social media platforms, collect feedbacks, and other third-party features.
Performance
Performance cookies are used to understand and analyze the key performance indexes of the website which helps in delivering a better user experience for the visitors.
Analytics
Analytical cookies are used to understand how visitors interact with the website. These cookies help provide information on metrics the number of visitors, bounce rate, traffic source, etc.
Advertisement
Advertisement cookies are used to provide visitors with relevant ads and marketing campaigns. These cookies track visitors across websites and collect information to provide customized ads.
Others
Other uncategorized cookies are those that are being analyzed and have not been classified into a category as yet.
SAVE & ACCEPT
Top
This site uses cookies: Find out more.