For the first time in its 16-year history, the judges and organisers agreed to add a third round to the line-up, due to the sheer number and quality of the entries received. 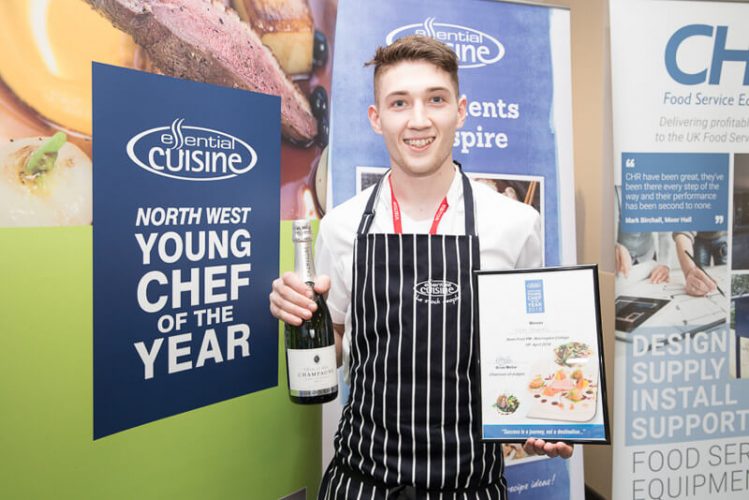 North West Young Chef of the Year Hots Up

The Warrington College played host to both the morning and the afternoon sessions of the 2nd and 3rd semi’s, and in total encompassed 5 hours of intense cooking, 13 chefs, 39 dishes, and several pairs of very tired feet!

On what was the hottest April day for 70 years, the sponsors from Essential Cuisine and CHR alongside the Judges and the college, all pulled together to ensure the day ran smoothly. Chefs competing in the afternoon semi-final were; Daniela Tucci (Art School,) Chris Ormshaw (Australasia,) Steven Halligan (Freelance,) Michael Parsons (Peckforton Castle,) Sion Hughes (Carden Park,) Mai Trising (Black Swan Hotel,) and Cyril Gabriel (Carden Park.)

Speaking about his win, Sion said: “It feels surreal to have won, I really wasn’t expecting it. Cyril Gabriel who works in my kitchen entered last year and got such a buzz from it, which made me want to get involved. Even though we were rivals today, we still looked out for each other, and worked together in the build up to practice and perfect our dishes.”

“For the Final in May I’ll tweak my menu to feature ingredients to suit the season, but maintain my style of cooking. And of course, lots of practice!”

Following the afternoon’s semi-final, Chairman of Judges Brian Mellor said, “it was great to see so many returning competitors and previous mentors involved again this year, we knew from the entry forms that it was always going to be an intense battle which is why we added in the third semi-final.”

Speaking about Sion’s performance, Brian said “for a first time competitor to perform so well in his first competition is a fantastic achievement. He was up against “experienced” competitors but he kept his head down and focused on his own dishes.”

The new competition format for 2018 will see the winner from each of the three semi-finals progress through to the final which will take place on 23rd May at South Cheshire College. For the unsuccessful chefs, there are still three top scoring places available, which will see the best runners up from across all three semi-finals progress through to the final, so all is not lost.