The moment we’ve been waiting for is finally here! The winner of the North West Young Chef 2018 competition has been announced.

CHR sponsors this competition and has spent the past few weeks eagerly awaiting the results of the competition. We would like to congratulate Cyril Gabriel for cooking his way to the first-place spot. 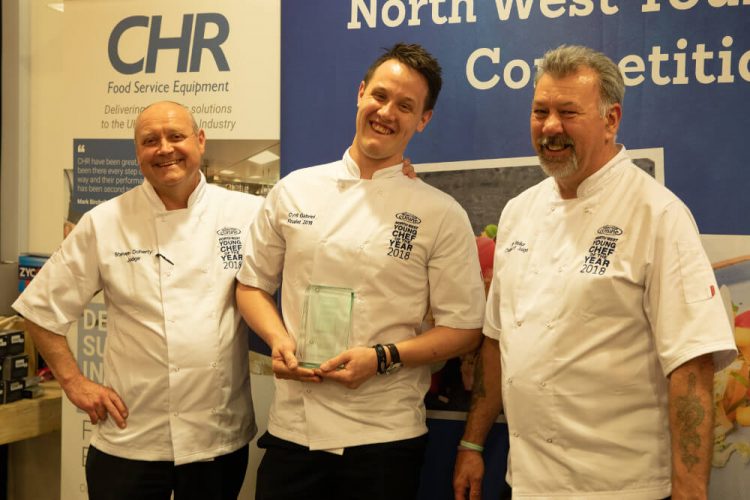 In the final round, the six remaining contestants faced the heat in an intense six-way cook-off which took place at Cheshire College South & West.  Each chef was marked on their ability to cook a restaurant quality three-course menu, taking into account the local and seasonal ingredients used.

This was followed by Welsh mountain lamb served with creamy mashed potatoes, an assortment of vegetables including pickled carrots and peas, carrot jam and lamb jus.

The winner was awarded with £500, a weekend getaway for two at The Mere Golf Resort & Spa, entry into the semi-finals of the renowned Craft Guild of Chefs’ Young National Chef of the Year competition, as well as a portable induction cooker from the CHR team!

Commenting on his win, Cyril said: “It was a hard day for all of us, real pressure and a hot kitchen, but I’m so happy to have come through as winner.”

“For the Final I submitted a more challenging menu than the one carried out in the semi-final as I wanted to push myself and show more skill. I was nervous in the lead up because of this but once I got in the kitchen and started cooking, the nerves fell away.”

What really stood out to the judges was Cyril’s determination to return to the competition after making it to the finals last year, his choice of flavours and methodical approach to cooking.

Chairman of judges Brian Mellor commented on the competition, saying: “Yet again the technique on show across the board has been excellent, this was one of the hardest competitions we have ever had to judge, but in the end, Cyril’s consistent quality shone through.”

“There was also real passion, pride and endeavour on show – something we’ve come to expect from the competition, but should never take for granted. We will be flying the flag for Cyril, come the national semi-finals.”

CHR would also like to say well done to the runner up, Mai Trising, and the other finalists, Oliver Mather, Ruairi Erwin, Sion Hughes and Alasdair Aitken. You all demonstrated an exceptional amount of talent and should be extremely proud of yourselves.